ACA on its 11th Year Anniversary 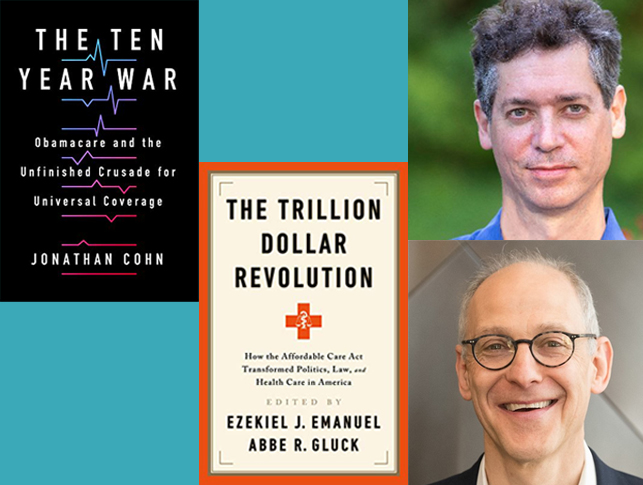 ACA on its 11th Year Anniversary

BUY THE TEN YEAR WAR>
BUT THE TRILLION DOLLAR REVOLUTION

About The Ten Year War

The Affordable Care Act, better known as “Obamacare,” was the most sweeping and consequential piece of legislation of the last half century. It has touched nearly every American in one way or another, for better or worse, and become the defining political fight of our time.

In The Ten Year War, veteran journalist Jonathan Cohn offers the compelling, authoritative history of how the law came to be, why it looks like it does, and what it’s meant for average Americans. Drawn from hundreds of hours of interviews, plus private diaries, emails and memos, The Ten Year War takes readers to Capitol Hill and to town hall meetings, inside the West Wing and, eventually, into Trump Tower, as the nation’s most powerful leaders try to reconcile pragmatism and idealism, self-interest and the public good, and ultimately two very different visions for what the country should look like.

At the heart of the book is the decades-old argument over what’s wrong with American health care and how to fix it. But the battle over healthcare was always about more than policy. The Ten Year War offers a deeper examination of how our governing institutions, the media and the two parties have evolved, and the dysfunction those changes have left in their wake.

Jonathan Cohn is a senior national correspondent at HuffPost, where he covers politics and policy. A former senior editor at the New Republic, he has written for the New York Times, Atlantic, and Self, among others. He has won several awards and was called “one of the nation’s leading experts on health policy” by the Washington Post. A graduate of Harvard, Jonathan grew up in Florida and lived for years in the Boston area before moving to Ann Arbor, Michigan, where he lives with his family.

Ten years after the landmark legislation, Ezekiel Emanuel leads a crowd of experts, policy-makers, doctors, and scholars as they evaluate the Affordable Care Act’s history so far.

In March 2010, the Affordable Care Act officially became one of the seminal laws determining American health care. From day one, the law was challenged in court, making it to the Supreme Court four separate times. It transformed the way a three-trillion-dollar sector of the economy behaved and brought insurance to millions of people. It spawned the Tea Party, further polarized American politics, and affected the electoral fortunes of both parties.

Ten years after the bill’s passage, a constellation of experts–insiders and academics for and against the ACA–describe the momentousness of the legislation. Encompassing Democrats and Republicans, along with legal, financial, and health policy experts, the essays here offer a fascinating and revealing insight into the political fight of a generation, its consequences for health care, politics, law, the economy-and the future.

Ezekiel J. Emanuel is the Vice Provost for Global Initiatives, the Diane v.S. Levy and Robert M. Levy University Professor, and Co-Director of the Healthcare Transformation Institute at the University of Pennsylvania. From January 2009 to January 2011, Dr. Emanuel served as a Special Advisor on Health Policy to the Director of the Office of Management and Budget and National Economic Council. Prior to that he was the founding chair of the Department of Bioethics at the National Institutes of Health from 1997 to August of 2011. Dr. Emanuel received his M.D. from Harvard Medical School and his Ph.D. in political philosophy from Harvard University. Dr. Emanuel served on President Clinton’s Health Care Task Force, the National Bioethics Advisory Commission (NBAC), and on the bioethics panel of the Pan-American Healthcare Organization. He has published over 300 articles mainly on health care reform, research ethics, and end of life care in the New England Journal of Medicine, the Lancet, JAMA, and many other medical journals.  He has also authored or edited 15 books. His new book entitled Which Country Has the World’s Best Health Care? was published in June. Dr. Emanuel is the most widely cited bioethicist in history.