Stupid Things I Won’t Do When I Get Old 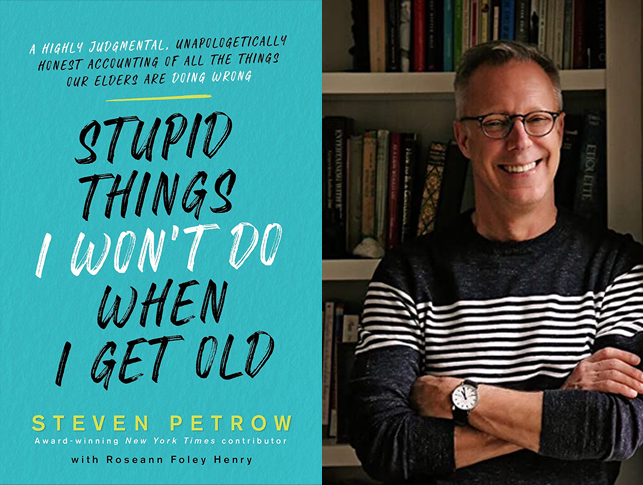 Stupid Things I Won’t Do When I Get Old

For fans of David Sedaris and Nora Ephron, a humorous, irreverent, and poignant look at the gifts, stereotypes, and inevitable challenges of aging, based on award-winning journalist Steven Petrow’s wildly popular New York Times essay, “Things I’ll Do Differently When I Get Old.”

Petrow was last at the book store with “Steven Petrow’s Complete Gay & Lesbian Manners” and he’ll be talking about some of the aging challenges specific to the LGBTQ community.

Soon after his 50th birthday, Petrow began assembling a list of “things I won’t do when I get old”—mostly a catalog of all the things he thought his then 70-something year old parents were doing wrong. That list, which included “You won’t have to shout at me that I’m deaf,” and “I won’t blame the family dog for my incontinence,” became the basis of this rousing collection of do’s and don’ts, wills and won’ts that is equal parts hilarious, honest, and practical.

The fact is, we don’t want to age the way previous generations did. “Old people” hoard. They bore relatives—and strangers alike—with tales of their aches and pains. They insist on driving long after they’ve become a danger to others (and themselves). They eat dinner at 4pm. They swear they don’t need a cane or walker (and guess what happens next). They never, ever apologize. But there is another way…

In Stupid Things I Won’t Do When I Get Old, Petrow candidly addresses the fears, frustrations, and stereotypes that accompany aging. He offers a blueprint for the new old age, and an understanding that aging and illness are not the same. As he writes, “I meant the list to serve as a pointed reminder—to me—to make different choices when I eventually cross the threshold to ‘old.’”

Getting older is a privilege. This essential guide reveals how to do it with grace, wisdom, humor, and hope. And without hoarding.